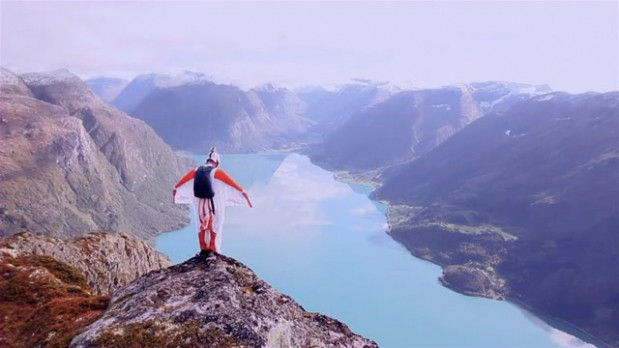 Today’s Links of Interest feature videos that give you some amazing first person perspectives on flying. While each is spectacular in its own right, together this set takes you through an increasingly exhilarating exploration of man’s quest to soar through the heavens. Get a pilot’s eye view of what it’s like to fly a corporate jet, strap on a carbon-fiber jet wing and fly in formation with two jets, and base jump off of a mountain wearing only a “wing suit” and parachute:

1) A Day in the Life of a Corporate Pilot

Ryan Roth is married to one of my favorite business colleagues. He’s also a corporate pilot. Using a GoPro camera mounted on his forehead, Ryan gives us an up close look at his work day as he delivers a Pilatus PC-12 to a maintenance facility for its annual inspection.

Swiss pilot Yves “Jetman” Rossy was featured on the cover of National Geographic in September of this year. He has designed his own carbon-fiber wing fitted with jet engines which he uses to race through the sky at speeds up to 184-189mph. In this video, he flys in formation with two jets. (HT: WIRED.com)

Espen Fadnes has been dubbed “The World’s Fastest Flying Human Being”. This video takes us to the top of a high peak in Norway to watch as Espen jumps off a cliff for a 155mph controlled descent to the alpine lake far below. Using multiple camera angles and top-quality production, I was absolutely floored as I watched his flight unfold. As soon as I finished watching it, I immediately watched it again. If you are going to watch one video in this set, this one is it.