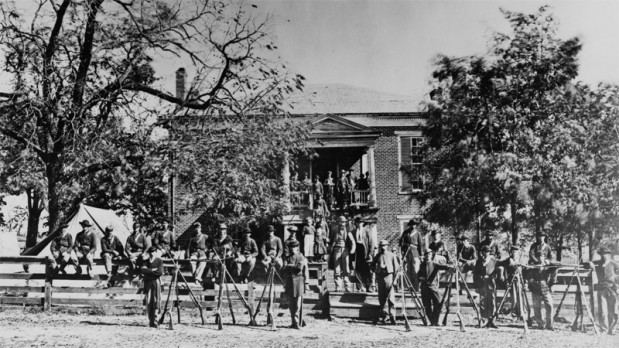 The third book in Bruce Catton’s non-fiction Civil War trilogy, A Stillness at Appomattox, came to my attention via a lofty recommendation. It was described as an accurate, heavily footnoted work which reads like a well-written work of fiction. Reviewer John Miller commented, “If every historian wrote like Bruce Catton, no one would read fiction.” Another reviewer commented that he was so taken by the writing that he read the book in one sitting. With reviews such as these in mind, I began Catton’s book back in April of this year and finished it this week, and although I certainly didn’t read it all in one sitting, I did find it a very satisfying read.

For the genre of wartime histories, Catton’s work was ahead of its time. He puts you right in the thick of the action by relying on first-hand accounts from the soldiers who fought the war. Amidst the grand drama of the conflict, Catton shows you what it was like to be an infantry man marching for miles along alternately dry and dust choked roads or bogged down highways of mud. Perhaps for a moment you have time to make your bivouac and rest only to be summoned into battle, leaving your half-cooked breakfast on the fire. It’s as if Catton was there although he was writing nearly one-hundred years after the war.

Given the quality of Catton’s writing, you may wonder why it took me so long to read his book. Life circumstances aside, the book wasn’t a “page-turner” for me because it was a little too drawn out at times. However, despite the slow going, reading the book was a satisfying and rewarding glimpse into our history, the kind of thing that’s worth reading all the way through.

The book’s lasting image in my mind occurs on its last page. General Ulysses S. Grant’s army has surrounded General Robert E. Lee’s army outside the small Virginia hamlet of Appomattox Court House (this is the name of the town, not just a building). The armies have faced off against each other with the Rebels quickly realizing they must declare a truce or be annihilated. A great stillness takes over the land as the two great armies solemnly face one another. General Grant makes his way into town to meet with General Lee at the McClean House. Catton concludes his book by writing that “as [Grant and his generals] neared the end of their ride, a Yankee band in a field near the town struck up ‘Auld Lang Syne’” (377). Considering the great drama that has played out over the proceeding pages, that detail gave me a sublime sense of the moment. I could hear the sounds, see the men, and feel the emotion of a profound moment in our nation’s history. It’s details like these that Catton includes throughout his book, and they make his account of history come alive.